From the archives: “Flying High” 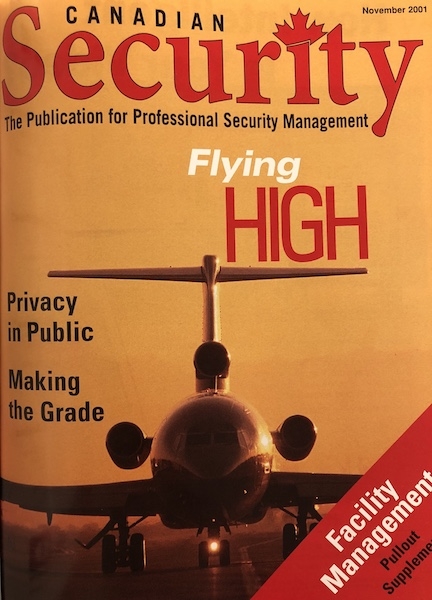 This week, we take a look back at the November 2001 cover story, “Flying High,” which covers changes to Canadian airport security in the wake of 9/11.

In the days after the attacks on September 11, 2001, the Airports Council International — North America (ACI-NA) announced stepped-up security measures, including thorough search and security checks of all planes and airports before passengers can enter and board, discontinuation of curbside check-in, discontinuation of airport check-in at other venues, and more.

Exactly one month after the attacks, the Canadian government announced new initiatives to enhance security at Canadian airports, including increased police presence, increased passenger screening, enhanced security procedures, and requiring cockpit doors to be locked for the duration of domestic and international flights on Canadian airline passenger aircraft. A number of other initiatives were also underway in Canada, such as enhanced risk management technology and contraband detection equipment to better detect firearms, explosives and illegal drugs.

The impact of 9/11 on airport security is still felt today — while some of these security measures, such as the discontinuation of curbside check-in, have been relaxed, more stringent security is the norm in airports today.