Brilliant use of cutting edge technology combined with multi-jurisdictional coordination resulted in four police officers being awarded the prestigious Canadian Banks’ Law Enforcement Award (CBLEA) for two separate investigations. One for investigative skill in identifying and arresting suspects of a violent gang accused of robbing a number of banks across Ontario and Quebec, and the second for an investigation into a sophisticated fraud ring operating across southwestern Ontario. 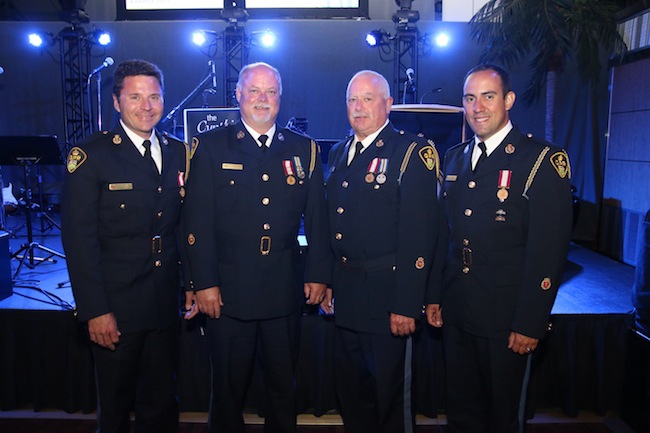 “Canadians trust their banks and consistently rate them highly. Upholding that trust means we depend on the close working relationships between banks and law enforcement agencies across Canada,” said Nathalie Clark, General Counsel and Corporate Secretary for the Canadian Bankers Association. “Banks in Canada, their customers and their employees are proud to celebrate the achievements of the four recipients of this prestigious award.”

Fraud is a crime where the victims are often faceless and nameless, but it is no less harmful. Each of these police officers demonstrated superior investigative abilities that through effective collaboration with other police agencies and the banks involved led to the arrest of the suspects in this organized and complex multi-jurisdictional investigation.

Detective Constable Jay Brodie – East Region OPP
In less than six months, four Ontario banks in Sault Ste. Marie, Cambridge, Sudbury and Stittsville were targeted by a gang of armed robbers. At each incident the criminals would smash their way through the front entrance of the bank. Then, after demanding cash from the bank employees, the masked bandits would flee the scene. One of the crucial developments in solving these crimes was identifying the pattern among the four Ontario robberies and matching them to a series of similar violent robberies in Quebec.

Detective Constable Jay Brodie devoted extraordinary hours coordinating, compiling and comparing evidence from all the robberies collected by seven different police departments in Quebec and Ontario. The arrest of the robbery gang was executed quickly, safely and successfully due to Detective Constable Brodie’s unwavering dedication and painstaking research.