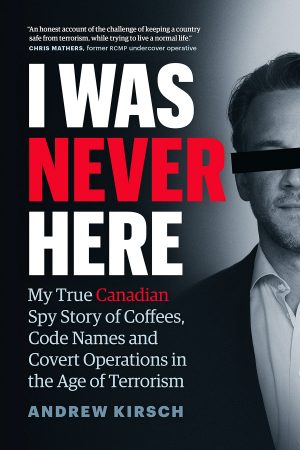 A former Canadian Security Intelligence Service (CSIS) field operative has written a book about his career with the agency, partly, he says, to give Canadians a better appreciation of what the organization does and how it helps to keep us safe.

Andrew Kirsch originally began his career in the finance industry in London, U.K., until a terrorist attack in the city spurred him in a different direction, he says. He applied to CSIS online, moved back to Canada, and began a 10-year journey with the service, first as a policy analyst, then as an intelligence officer. After leaving CSIS, Kirsch spent two years working for the Ontario provincial government before establishing his own Toronto-based security firm, Kirsch Consulting Group, almost three years ago.

Kirsch’s new book, I Was Never Here, offers some insights, he says, into what is largely an overlooked branch of government for most Canadians.

“One of the reasons I wanted to write this book is because I wanted to say, there’s this organization in Canada that does neat things that no one knows anything about,” he says. “I think it’s to our detriment that we aren’t more aware about the challenges and the people who are doing this stuff.”

Kirsch says his book isn’t about policy or politics, but more of a “very personal story about what it was like to commit to this area of public service.”

A preview page on Kirsch’s website promises the book will lift the veil (to the extent that he’s allowed to) on his former life: “If you’ve ever wondered whether spies can have real dating lives, how they handle family responsibilities, or how they come up with cover stories or aliases, you’re in luck.”

I Was Never Here will be released on March 1 and is currently available for pre-order.