Tony Weeks has always been one to challenge the status quo in health care security, but two years ago he was getting restless and looking for a new project — something that would put him ahead of the pack— something no one else had done. 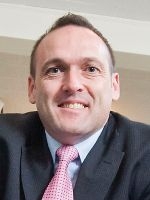 So when he heard about what Alberta Health Services wanted to do with its security operation — centralize 12 former entities into one operations hub based in Edmonton and provide a level playing field when it came to service whether it was an urban hospital or a small northern acute care centre — he realized he’d found the ultimate challenge.

The main thrust of the task facing Weeks and his team? It sounds like a cliché, but essentially it was to do more with less, provide equitable service and save money at the same time, which would ultimately be funnelled back into the health care system. It’s estimated that changes made within protection services to date will save the Alberta health care system about $3.5 million.

“A lot of people like to say what we’re doing is about saving money, but it’s doing more with less and actually enhancing the service model we have so that everyone has fair and equitable service. At the same time, yeah, we are definitely saving money for Albertans and reinvesting in patient care,” he says.

All the change would come at a cost though — investment in new technology, long hours and considerable criticism from labour unions, but Weeks has stood up to his critics and says that, really, the feedback hasn’t been as bad as he thought it would be. 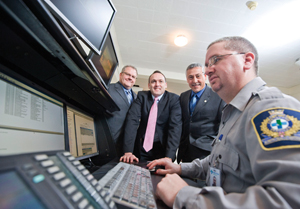 Emergency visits at those hospitals range from 4,000 to 80,000 a year, so Weeks and his team visited those sites to determine the best staffing mix.

It’s been a whirlwind year since he started last May, but he hasn’t looked back and he’s energized by what he feels is a progressive revolution in how health care protective services can be provided.

“The reason this position interested me was because I knew the challenges it would present, and I was at the point in my career where it was exactly what I needed. Nobody else can say they are doing this — I wanted to be part of that,” says Weeks, who was formerly director, security and life safety and emergency management, with the Kingston Hospitals where he amalgamated all health care services across five different sites.

Weeks also saw it as a chance to try something new in a climate where change was being embraced.
“I was frustrated in Ontario in the way health care operates in the province. You can see all around you a ton of opportunity to do a lot more from a security and emergency planning and life safety perspective, but you can’t get the hospital next door to you to agree to approaching things together,” says Weeks.

He estimates that Ontario is probably more than 10 years behind what Alberta and B.C. have done to centralize health care services.

“To get anything off the ground was consistently so challenging. I saw an opportunity here where I was going to be a driver of change and things were going to be done consistently; I jumped on board,” he says.

When he arrived at Alberta Health Services, Weeks had to hit the ground running smack in the middle of a reorganization. The new CEO, Dr. Stephen Duckett from Australia, had just come on board in March 2009.

“We had to amalgamate 12 former entities — health authorities and different organizations — into a single Alberta Health Services organization,” says Weeks.

The first two things he did was create the new leadership structure and divide the province into a new operational services model.

He rolled up his sleeves and collected data on crime and demographics and created his own service model map.  He also began recruiting for the new leadership model put in place and hired many people from within the previous structures that were in place.

What he found was an uneven distribution of security service across the province. While Calgary, Medicine Hat and Lethbridge were enjoying extensive security resources, in the north — basically anything north of Edmonton — there were very limited security resources at the sites.

“We knew we couldn’t put a security person in every hospital. We looked at community crime, ER visits, health and safety issues, and determined different risk levels.”

He then set a threshold to determine where staff would be required at a site, where staff weren’t required, but which ones still required support from the central operation.

Weeks implemented 15 new mobile community peace officers (special constables empowered to enforce all provincial statutes) throughout the province who patrol in geographic areas where there is no site security to help augment the police response.

In addition, those officers can provide in-service training on emergencies and disasters and fire safety, as well as things such as crisis prevention training.

Prior to the new model being created, those smaller facilities couldn’t even pick up the phone and call anybody at the province for advice about security — they would typically have a consultant or call a security company.
The next step was to implement the provincial security operations centre. Before the implementation there were seven centres scattered around the province — basically anywhere there was a former region, they had some level of operations centre. With centralization, it’s now one call and it provides immediate access to protective services ,and response to the call begins.

All cameras, alarm points and access control points report into the centre.

Centralization will also provide standardization and provide security to rural areas that in some cases didn’t have any security at all, says Ed Yeomans, director of the southern operation, protective and parking services. “From a staffing perspective they will receive the same level of training, which is standardized across the province. Our policies and procedures will be one across the province. At this stage of the game the challenge is taking all the former regions and policies and procedures and trying to convert them into one. Hopefully, you can take the best of all worlds,” he says.

Yeomans says for all of this to take place in one year required a lot of work, and while he admits it’s not perfect, it is constantly under review. “We had different unions representing people across the province. It shows when people put their minds to change you can work together.”

“This is a learning curve for us, so we’re looking at call volumes and at the right staffing mix at the control centre, and as we grow that will need to be adjusted. The biggest thing is we’re talking on facilities that didn’t have any support before, so that’s a whole new call volume. It has resulted in some savings and that has been deployed to cover the mobile patrol,” he says.

Overall, the entire package will save about $3.5-million after paying for centralization of the new operation centre, implementing 15 new mobile patrol vehicles and staffing changes.

“We plan to fit every emergency room in every hospital with the latest camera technology that will be fed back to our 24/7 operation centre,” says Weeks.

The portion of the restructuring program that has garnered the most attention has been the guard portion because Alberta went to a partially outsourced contract model.

Paladin Security won the three-year contract, displacing several other security providers. And while Weeks used Paladin in Kingston, he says he removed himself from the selection process to avoid accusations of playing favourites. He insists Paladin won the contract based on their presentation and ability to ramp up to provide the resources required in a relatively quick time frame.

“It was a tight competition and it wasn’t all about price. We developed a short list based on competitive criteria. Those on the short list did a presentation to a panel. I pulled myself out of it to make sure there was no misinterpretation of my role and made sure those who did hear the presentations hadn’t worked with them before and that they ranked and rated the presentations. It was unanimous that Paladin did the best job,” he says.
Alberta Health has roughly 260 Paladin employees and about 200 in-house community peace officers. The Paladin contract is in the magnitude of 700,000 hours a year.

When it came to the technology component, Weeks knew legacy systems were going to pose problems, including some VCRs in small locations. He looked at amalgamating access control systems and weighed the benefits of consolidating on one system versus keeping the two main legacy systems going. He opted not to put all his eggs in one basket.

For example, the former Calgary Health Region was using AMAG, and everything north of Edmonton was using Lenel.

“We looked at choosing one of those manufacturers and going with it provincially, but at the end of the day it was going to cost a lot to migrate one to the other because there were too many competitive aspects,” he says.
Instead, it was decided to continue to run with the two products so in the operation centre it’s divided in half — north and south. The south zone runs on AMAG and the north on Lenel.

Bringing together all the disparate systems was a major challenge.

“We were looking at bringing over a dozen different proprietary legacy systems into two platforms,” says Greg Smith, director of enterprise security systems and analysis, who praises the in-house talents of the technical staff on board at Alberta Health.

Alberta Health has also invested in training for its in-house staff on card readers and how to troubleshoot cameras and installations. Smith’s department also benchmarks equipment and invites the IT department to participate on decision-making to help guarantee buy-in.

Smith says one of the benefits he’s already seeing from centralization is when it comes to replacing or repairing equipment. “Because we have stock available, if a camera or card reader goes down, we can immediately send out replacement equipment and have it fixed faster. In the old system it was a big deal to purchase something, but now, when, for example, Fort Vermillion has a few cameras go down, we don’t have to send up an integrator by float plane — we can FedEx up a couple of cameras and the on-site facilities person can hook them up.”
When it came to evaluating what sites to upgrade first, priority was given to the small hospitals with ER departments without security at the site.

“We’re looking at technology that will allow us to lock down the ER and, through the operation centre, have two”“way communication with the nurse who might have to go to the door to determine if she lets the person in and whether to wait for police or not,” says Weeks.

Weeks knows his biggest challenge is building credibility for the program, and he’s trying to do that through town hall sessions with staff at the hospital level.  He gives full credit to his team and says he’s thankful for the support he gets at the executive level.

“I have the good fortune of having really strong leaders that work with me, so it moves mountains. And that’s what these guys have done in the last year,” he says.

“It’s high risk, but high gain. We have a lot to prove — I’ve made a lot of big statements and sold this to a lot of people. Personally, I have invested a lot into this to make sure it’s successful. I have confidence it will happen because I have a strong team. I couldn’t be happier being part of this.”