At the Canadian Museum of Nature, they know some things take time. They recently completed renovation, for example, which saw their magnificent “castle” reconstructed down to its foundations, was completed in phases over six years — a pace which might seem glacial in the security world. But, like the renovation, the task of installing the system that would protect the museum’s archaeological collections, which range from sweeping tableaus to priceless gems, could not be rushed. Security teams simply had to adapt. 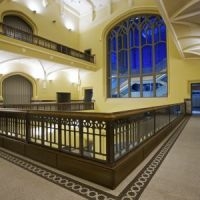 Of the museum’s two facilities, its main site, the Victoria Memorial Museum Building in Ottawa, had a completely new system installed, including access control and detection around the perimeter and detection between exhibits to provide individual monitoring and access control. The system at both the VMMB and the Natural Heritage Building, the museum’s research facility, is Lenel’s Onguard 2006, while the management software and cameras are mostly Pelco.

“Overall, we started from scratch and just rebuilt everything, from the ground up,” says André Fortier, the museum’s senior officer, protection services.

At the Natural Heritage Building in Gatineau, the system was upgraded, and the two facilities were connected so each can be monitored from the other. The connection allows for live transfer of the monitoring of both the CCTV and the access control from one building to the other, says William Kuffner, senior fire protection engineer at Genivar.

“A person at one location can go on patrol and still be in radio communication with somebody at another facility who’s monitoring the facility for them and alert them of anything going on,” he says, adding the link also means the museum can reduce patrol staff when the building is closed.

One of the most significant changes was made in the access control system. High among the museum’s requirements was to be able to separate public from non-public areas. The VMMB provides space for many events — from conferences to weddings. It was important, Fortier says, to have routes that let technicians set up events away from visitors. Before the renovations, they had three card readers.

“So everything was done through keys,” he says. “Now, with the new access card systems and over 35 readers, it gives us more flexibility and more convenience for staff in circulating throughout the building.”

In the temporary exhibit halls, CCTV cameras were mounted on tracks, and extra lead wire left, so they could be easily repositioned within the exhibit. Because the ceilings are about eight feet higher than the temporary walls, the cameras can see on either side of the walls. “The track system is both for security and exhibit lighting,” Fortier says.

Designed more than four years ago, the system is entirely analogue. “When this started, that was the world we were living in,” says Mark Leggo, account manager at Diebold. “IP was just not there. You didn’t get the quality of the video image in 2006 that you’re getting more so today.

“If we had done this project today, you probably would have been looking at a complete IP solution. I don’t think we’d be doing this size of a system on a coaxial backbone.”

From one collection to another, security ranges from highly sophisticated to basic, says Fortier, who has a staff of 25. In the mineral gallery, for example, where valuable gems are on display, each showcase has been fitted with motion detectors. If any movement is detected, the overhead cameras automatically pan over and zoom in on the case.

“Compared to what we had before, it’s incredible,” he says. “And it’s a fun system to work with, the advancement and the number of features. There are things you’d never think you’d be able to do, and you can. I don’t know for what function they’ve developed the software, but it really works well for the museum.”


Then there is the mammal gallery, where most specimens are contained in dioramas and protected by glass. High tech access control isn’t needed. “What I want to know is if there’s a glass that’s broken, and that’s it,” Fortier says. “And the access panels for the dioramas are protected because they’re accessed through a series of doors, which are monitored through door contacts. It’s much simpler within some spaces depending on the value and the accessibility.”

Originally set at $500,000, the project ended up costing $850,000. Over the years, plans were often changed and each time a string of approvals was required. Manufacturers would make a product obsolete, Leggo says, “and we’ve got several hundred of them in use, and now we’ve got to iron out the waters to bring something that’s acceptable to all the players.”

And remarkably, the museum stayed open to the public throughout the reconstruction — in fact, in six years, it closed completely for a total of only 12 weeks.

“It was much more complicated to do it that way,” Kuffner says. “We had to install in sections and test in sections and then move people, transfer equipment over, decommission over here and build over there.”

To reduce labour time and costs they moved all the equipment out of a central location and distributed it to electrical and communications closets on different floors.

Added to that, the reconstruction had been under way for two years before any real thought was given to security, Leggo says. “That was an incredible challenge,” he recalls, describing the early building phases as a “dramatic roller coaster ride.”

“The security portion of this building was almost a complete oversight during the construction process. It was only once everything had been awarded to the general contractors that, all of a sudden, people started asking, ‘What about security?’”

Some architectural and electrical work would prove incompatible with the security requirements, which meant in 2006, when the security project began, some changes had to be redone, Leggo says. “So, unfortunately, there were a lot of obstacles that we all had to overcome to deliver them a fully operational system.”

Once started, however, work on the project was marked by an unusual degree of co-operation. Instead of treating security as a separate process, Kuffner says, the security engineers became part of the design team, working alongside the architectural, mechanical and electrical engineers. “That security was put on the same level as the other engineering tasks —that was fairly unique for this one.”

Kuffner says security and IT also worked together to create a virtual private network for the security system, so the CCTV and access control always have enough speed that service will not be degraded. “It required a special level of co-operation between the IT manager and the security manager to have it happen,” he says.

Right now, security teams are tying up loose ends — completing the programming of the different systems, including linking the showcase alarms that will activate the cameras and put them on the right monitors. The main project, Leggo says, may be completed, “but the evolution of the system is continuing.”