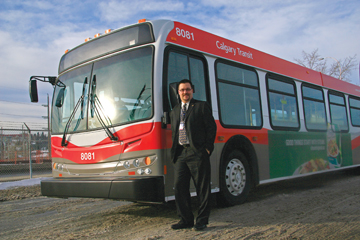 As is too often the case, tragedy is the catalyst for improving security and safety in many organizations. Unfortunately, that’s one of the drivers behind a new multi-million dollar system that is in development for Calgary Transit’s C-Train system.

It was the murder of a woman on her way home from work two years ago
that highlighted the need for improved CCTV systems in the city.
In 2008, 41-year-old Arcelie Laoagan was murdered shortly after she
stepped off the city’s Franklin Light Rail Transit station as she
travelled home from work on the night of Jan. 17 at about 10:30 p.m.

Although the crime occurred off the station property, concern was
raised that the system was unsafe.
At the time of Laoagan’s death, Calgary Transit had 300 video cameras
monitoring LRT stations. Surveillance was able to capture images of her
getting on and off the C-Train, but not the attack.
Investigators sifted through hours of LRT surveillance video and
believe her attacker was on the same C-Train as Laoagan on the night of
Jan. 17, 2008 and that he followed her when she left the station.

Police believe she was being followed as she walked toward the south
parking lot and made her way toward a pathway behind a nearby church.
Her body was badly disfigured and police had to use samples of the dead
woman’s fingerprints to identity her.

About a week after Laoagan’s murder, city council approved a safety
audit of the transit system.
The fact she was killed in the area of the transit system brought into
question the security and safety features of the C-Train line. An
extensive report was done on and as a result the City decided to
enhance security of C-Train and bus system.

“It’s a CCTV system that was originally installed back in the 80’s when
the C-Train was launched. It actually wasn’t intended for security
purposes — it was intended for operational purposes to see how many
passengers were at the station, and that trains were getting to
stations on time. Now, the primary focus for CCTV is security,” he
says.

After the initial security report came out a few years ago with regard
to transit safety and security the City received funds from the
government to upgrade security systems on the C-Train.
Also in 2008, Transport Canada started developing a code of practice
for conducting security risk assessments on mass transit operations.
Calgary Transit participated in that — in fact it was one of the first
projects Bolli participated after joining the City.


Since Laoagan’s death, Calgary Transit has taken the following
measures:

”¢ Opened a new security office at the Centre Street C-Train station, as
part of planned improvements.

”¢ Installed a new surveillance camera at the Franklin LRT station south
parking lot, as part of a previous plan to deter car thieves.

”¢ Hired eight transit officers, bringing the total to 70.
Launched a 90-day pilot project for teams of transit officers and
Calgary police to patrol the northeast leg of the LRT.

“Our RFP is now out for the upgrade of CCTV through the whole transit
system. We’re moving to an IP-based CCTV system with lots of growth and
flexibility, adding new cameras to pick up the blind spots and enhance
what we’re doing,” says Bolli.

Calgary Transit is looking at a networked-based, on-the-edge recording
system.

“We are going to be overhauling how many cameras are at each station
and increasing numbers at some of the older stations to make sure have
all areas covered. As a result of having more cameras the City will
have more traffic and more recording. “We want to go with an edge-type
system and get it back to a central area for when it’s needed.”

Bolli says the goal is to have better information coming from the CCTV
system.

“We want to see what’s going on, see where to send our peace officers
and be able to provide them back up protection in the event of
situations. We can’t do that right now; we have limited coverage and
that’s why we’re doing this big upgrade,” he says.

In the next few years the west LRT is also coming on line — a whole new
line west of the city from the downtown which is another big driver to
upgrading existing systems.

And as Bolli points out, the challenge is to pick technology that will
integrate with the old and the new as it is brought on line.