Book review: The truth about lying

There’s a saying, “A lie travels around the globe while the truth is putting on its shoes,” that many attribute to Mark Twain. 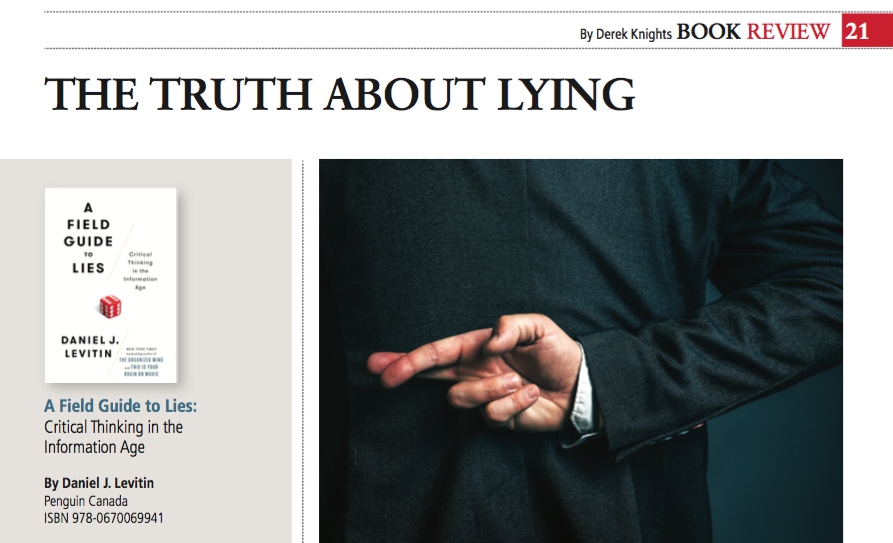 If they do, they’re wrong — maybe they’re lying. Poor Mr. Twain also apparently never said, “It ain’t what you don’t know that gets you into trouble. It’s what you know for sure that just ain’t so.” This latter quote opens Part One of Daniel Levitin’s book, “A Field Guide for Lies — Critical Thinking in the Information Age.”

The dust jacket calls this book a “primer for the critical thinking that is now more necessary than ever” and that people today are “bombarded” daily with “bad data, half-truths, and outright lies.” Well, it is and we are. For anyone who deals in information accuracy this is an important book. Its author is on the faculties of both McGill University in Montreal and the University of California at Berkeley. I also reviewed his previous book, “The Organized Mind,” in this magazine. Both books show that Professor Levitin has much to say about clarity and discrimination in thinking.

Part One is particularly interesting for security managers who need to report to senior management with numerical metrics, or maybe more importantly, those who receive those reports! The professor takes great pains to explain how clever manipulation of an x- or y-axis can change a reader’s perception. He shows that merely using averages, without context or care in sampling, can result in “truths” such as: “On average, humans have one testicle.”

Part Two features chapters such as: “How Do We Know?” and “Counterknowledge.” In the former, he shows us how we are a story-telling species that acquires information in three ways: we discover it, we absorb it implicitly, or someone tells us (mostly this last one). What is the speed of light? 186,000 miles per second. How do you know? Someone told me. Do you doubt them? No. This is how much of our learning goes. Counterknowledge, then, is a term used to describe the fake stuff, the Facebook fodder, the nonsense spewed lately in a certain election (well, probably all elections!). In the absence of critical-thinking people, humans will believe this stuff too easily.

Part Three gets very technical. Once again, the professor delves into the brain, our “giant pattern detector” that fools us more often than not because it can “project” patterns or significance onto circumstances that don’t warrant it. Have you ever been thinking of someone and just then that person phones or texts you? If it ever happened, you would remember it. But you won’t remember all the times you were thinking of someone and he or she never called. And trust me, this part gets way more technical than that!

The Internet permits vast amounts of real and fake knowledge to sit side-by-side: knowledge and counterknowledge. It’s training our minds to think critically — and then thinking that way all the time — that will lead us to success. So will reading this book.