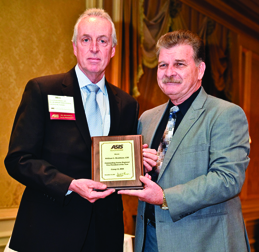 At the recent ASIS International Volunteer Leadership Convention in Washington D.C., Bill Bradshaw, CPP, was announced as the Outstanding Senior Regional Vice President (SRVP) of the Year for the society.

This prestigious award saw Bradshaw recognized for his work as SRVP for Group 12, which includes all of Canada. Bradshaw was selected from among the 21 SRVPs that represent ASIS in 58 countries around the world. Bradshaw has indicated that this award is a reflection of the hard work put in by all of the dedicated volunteers in the nine chapters across Canada.

Bradshaw was recognized for his achievement by Toronto Chapter president Carol Lovell at the ASIS Toronto meeting held Feb. 17.

Also announced at the meeting Feb, 17 was that there is now an ASIS Chapter established in Saskatchewan — Chapter 10.