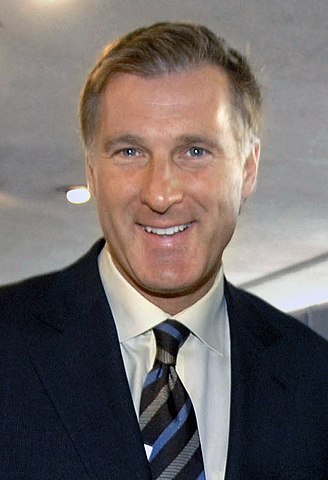 OTTAWA—Maxime Bernier says that if he becomes prime minister, his government would slash immigration and refugee numbers, build a fence to block asylum seekers from walking across the border, and end a program that lets immigrants sponsor their families to join them.

With his People’s Party of Canada barely touching two per cent in opinion polls, the Quebec MP chose to hit one of his key themes at an event in Mississauga, Ont., a western suburb of Toronto.

“I can understand why immigrants would want to bring the rest of their extended family here, including older ones who will benefit from our health-care system,” Bernier said in the prepared text for his speech Wednesday evening. “But we cannot be the welfare state of the planet.”

He pledged to reduce the number of immigrants admitted to Canada each year to 100,000 or 150,000 at most, if the economy and “other circumstances” allow that many. Canada currently admits about 350,000 immigrants.

Bernier said Canada must look after its own citizens first, and focus on newcomers who bring economic value to the country.

He denounced “mass immigration” and “extreme multiculturalism,” saying that these policies would lead to “social conflicts and potentially violence.” These ideas have nothing to do with freedom, his speech said, but rather “a very dangerous type of social engineering.”

He identified “Islamism or political Islam” as a threat to “our values and way of life.”

And Canadians agree with him, Bernier said, citing polls suggesting up to half of respondents think immigration levels are too high.

Bernier promised to make each immigration applicant go through a face-to-face interview with a Canadian official to judge the applicant’s values and his or her acceptance of Canadian “societal norms.”

He cited one of his nominees in Ontario, Salim Mansur, who has written that official multiculturalism is a lie.

“A lie based on the idea that all cultures are equal,” Bernier said. “A lie destructive of our Western liberal democratic heritage, traditions, and values based on individual rights and freedoms.”

Finally, on refugees, he pledged to build fences at popular crossings for migrants between official ports of entry—including a popular one in Quebec—and to rely on private sponsorships for funding new immigrants rather than government support.

His speech said that a People’s Party government would focus on religious minorities in majority-Muslim countries and “members of sexual minorities,” instead of refugees identified by the United Nations.

Bernier’s speech also rejected any allegations of racism against him and his upstart party.

“I have said many times that racists and bigots are not welcome in our party. We care about shared values, culture and identity. You can be of any ethnic background or faith and be a Canadian if you share fundamental Canadian values, learn about our history and culture, and integrate in our society.”