New research published recently by BAE Systems reveals “a surprising disconnect between C-suite executives and IT decision makers in defending against cyber threats”. The research, conducted in eight countries around the world, shows that “C-suite and IT leaders believe that each other is responsible for managing the response to a cyber-attack”. 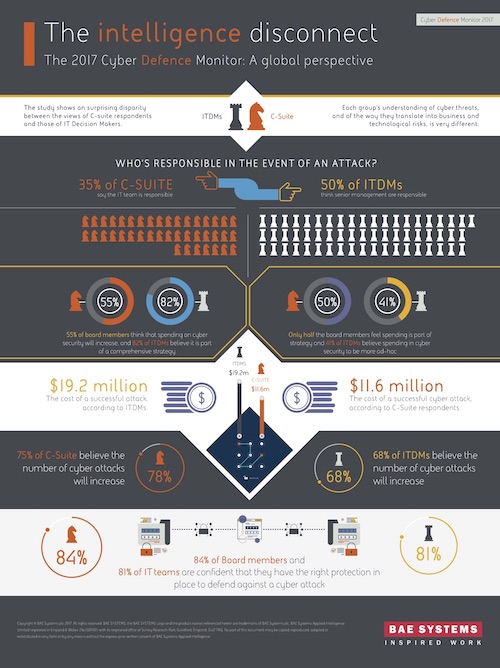 BAE Systems says it commissioned insight analysts, Opinium, to undertake this research to understand the current state of play when it comes to business cyber security. A total of 221 C-suite and 984 IT decision makers were polled to understand their concerns and perceptions of preparedness when it comes to their own cyber security. The research shows that the C-suite level estimate the cost of a successful attack to be dramatically lower than their IT colleagues.

These latest findings reveal that cyber security is the most significant business challenge to 71% of C-suite respondents, according to BAE Systems. Additionally, 72% of IT decision makers think they will be targeted by a cyber-attack in the next 12 months, and both groups report that they expect the frequency and severity of attacks to increase. To counter this, more than half of C-suite respondents (55%) plan to devote more time and resource to cyber security.

Other key findings include:

•    35 per cent of C-suite respondents say their IT teams are responsible in the event of a breach whereas 50 per cent of IT decision makers think responsibility sits with their senior management and leaders.

•    IT decision makers believe the cost of a successful cyber-attack on their business to be around US$19.2m compared to an estimation of just US$11.6m from C-suite.

•    C-level executives say that 10 per cent of their organization’s IT budget is spent on cyber security and defence, compared to 15 per cent according to IT decision makers.

•    84 per cent of the C-suite and 81 per cent of IT teams are confident that they have the right protection in place to defend against a cyber attack.

•    More than half (55 per cent) of C-suite respondents say they plan to increase spending on cyber security in the coming year.

•    While 82 per cent of IT teams report that their cyber security spend is part of a comprehensive strategy, only half of the C-suite (50 per cent) believe this to be the case.

•    41 per cent of C-suites believe the investment is more ad hoc, rising to 70 per cent of those who are not confident of their ability to prevent a cyber attack.

“With successful cyber-attacks regularly making headline news, our findings make it clear that the C-suite and IT teams recognise the risks,” said Kevin Taylor, managing director of BAE Systems Applied Intelligence, “but need to concentrate on bridging the intelligence gap to build a robust defence against this growing threat.”