APSA hands out guard of the year award to Ottawa Commissionaire

Commissionaires security officer George Sayer has been recognized as Guard of the Year for 2014 by the Association of Professional Security Agencies (APSA). 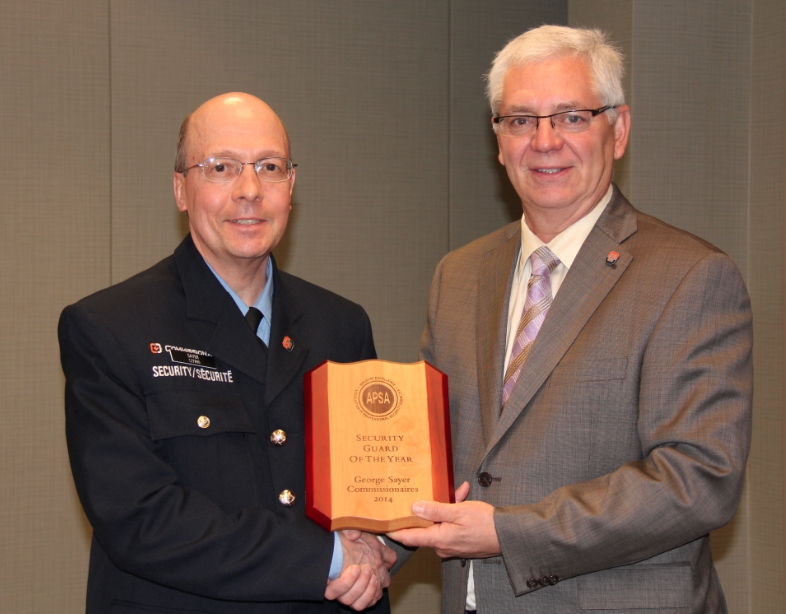 Sayer, who lives in Ottawa, received his award on June 11 in a small ceremony held in Toronto which was attended by members of the APSA board and several of Sayer’s family.

Sayer has worked for Commissionaires Ottawa for the past eight years, mostly at the reception desk at the head office of the Canada Mortgage and Housing Corporation (CMHC).

He describes himself as “dependable, conscientious, organized and efficient,” and prides himself on his memory for names and details — a skill that has served him well in a customer-facing job.

In addition to front desk duties at CMHC, Sayer has also been responsible for access control and parking control duties, as well as performing security patrols. Guindon notes that Sayer was instrumental in an access control project that affected CMHC in 2012, requiring him to register and issue new passes for almost 18,000 CMHC employees — a feat that was accomplished without a single error.

Prior to becoming a Commissionaire, Sayer was employed in a variety of professions, including working as an assistant for a federal MP, teaching English as a second language, and providing support as a health care worker. He also has an education background in architectural technology.

In his acceptance speech, Sayer thanked his Commissionaires supervisors and noted that, at age 64, winning the award “is deeply satisfying at this stage in my life.” He also extended his gratitude to APSA and the members it represents. “All of them do important and essential work. Our society is better because of those guards.”

Sayer was also recognized by the Commissionaires Ottawa organization in 2013 when he received its own guard of the year award.