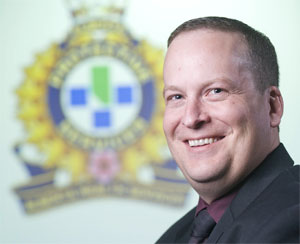 Alberta Health Services, an integrated health-care system covering 98 acute care hospitals and more than a thousand facilities province-wide, is rolling out a decentralized surveillance camera model, with video storage out on the edge.

Alberta, like most Canadian provinces, faces the challenges that come with serving small, remote communities that have limited resources and are difficult to reach, especially in the harsh winter months. In 2009, the province completely integrated its health care, bringing together 12 formerly separate health authorities in an attempt to provide uniform care. Then in 2010, Alberta Health Services embarked on a province-wide security strategy for its facilities to ensure they all had access to protective services. Pre-integration, less than half of Alberta hospitals had access to security services, but through a new staffing model —the deployment of mobile community peace officers — even the remotest of facilities have access to security. AHS also established a centralized security operations centre in Edmonton, available 24/7 to all sites with real-time communication through a provincial radio system.

“In terms of protective services, our goal is to provide access to service — basically to security services throughout the province, from urban to rural. We want to have a consistency of service and a standard of service,” explains Greg Smith, Director Enterprise Security Systems, Protective Services, Alberta Health Services.

Alberta Health Services also reviewed its use of camera technology to determine how security coverage could be improved. “For example, if the big urban hospitals have access to CCTV and security, why don’t the rural sites? Recognizing this, we wanted to provide this access to rural acute care hospitals,” says Smith.

Smith and his team conducted a review and gathered information on the rural acute care sites — approximately 78 — and prioritized them based on risk. “We needed to find a product that would be reliable, low impact on IT infrastructure and cost-effective.”

The problem with most camera surveillance set-ups is they require significant infrastructure and video storage can serious tax networks.

After some research, Alberta Health discovered a camera solution from Bedford, Mass.-based VideoIQ called iCVR. The company’s claim to fame is that its cameras provide storage and analytics as a self-contained unit — no backhauling of video, no off-site storage, meaning that existing networks aren’t additionally burdened when cameras are installed.

Mark Gally, vice-president of marketing for VideoIQ says that health care is one of the company’s chief markets. The product also plays well in the education market. Organizations with a decentralized structure and older buildings tend to appreciate the product’s self-reliance. “You largely eliminate the need for a dedicated high capacity network,” he says, “or at the very least it allows you to place video on minimal networks.”

Smith also liked the fact that VideoIQ cameras are based on open architecture, meaning Alberta Health can use the software provided, or go with software from another vendor like Genetec or Omnicast.

“After (the IT department) reviewed the specs — and they’re quite pleased with the low impact on the network the cameras reside on — we embarked and put one VideoIQ camera in 24 high priority emergency rooms across the province of Alberta. That camera, along with the phone number to our 24×7 communications centre, gave clinical staff a resource they’ve never had before,” says Smith.

“If a staff member calls us up and says they’re having an issue with a patient, we can call up the camera and watch it live as well.”

Based on live video footage, the security department can take appropriate next steps. On one occasion, says Smith, a patient struck out at a nurse. The provincial security communications centre was contacted. “We called up that camera. We were able to see the individual acting out. We called the RCMP and the Alberta Health Services peace officer. They responded to deal with the individual.”

On-board camera analytics are also useful for patient protection, says Smith. “Man down” analytics provide an alert if a person moves from a vertical standing position to horizontal for a predetermined period of time. Patients can also be located if they go missing. “We’re able to bring up historical footage of the patient, tell the computer to look for this person and it will search its memory to find out what times the camera saw this person.”

Smith says Alberta Health is impressed by the cameras, particularly by the ease of installation — which is important for remote locations with limited resources. In many cases, the cameras can be installed by local IT departments, avoiding the cost of flying an integrator into the area. “When we explained to IT that these cameras are basically like attaching a computer hard drive to a wall — it just happens to have a lens on it. They understand that. If we say, ‘We want you to install a camera system,’ they tend to get really worried and they want to get an integrator.”

Alberta Health is making a bigger commitment to the VideoIQ technology with several large projects coming online in the next year. One site in Edmonton is about to deploy approximately 80 of the cameras. “That’s going to be a real big test,” says Smith. “They’re great in a small application but nobody’s ever done a huge deployment before in one site. It will be an interesting trial.”