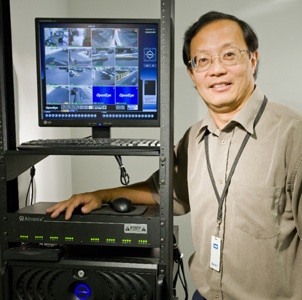 An Alberta-based hardware chain is trying to nail down its security infrastructure one store at a time.

Totem Building Supplies Ltd. operates more than 15 stores in the province with two recent additions in Lloydminster and Strathmore.

Totem was bought by Rona Inc. in 2005, and while Rona oversees Totem
operations and reviews budget numbers, they leave a lot of the
decision-making to Totem’s transportation and resource protection
manager Ed Mah.

“They need to know how much stuff costs, but the decision ultimately rests upon my shoulders,” says Mah.

“We had them install the CCTV system, the alarm controls, the
safe, as well as the Medeco lock system. It was a huge endeavour,” he
says.

The most important item on Mah’s security agenda was centralized control.

“Being in charge of so many locations, the biggest challenge is
obviously distance and having control from a centralized point,” he
says. “What I’ve asked from Contract Security is the ability to have
everything centralized, whether it be CCTV or alarm or access — just
being able to control it all from one database.”

Contract Security’s solution was to manage everything using a
Guardall database which could be accessed via a secure IP connection.
Using client software that had been pre-authorized against a central
server, Mah, as well as individual store managers, are able to view
cameras, add or subtract employees on the access control system, or arm
or disarm entire stores, depending on the level of authorization
available to each user. “The database that we created for Totem was set
up on an administrative platform so they can centralize everything to
their head office rather than having a separate operating system and
software suite running in each store,” says director of security and
integration for Contract Security Graeme Browne.

According to Peter Gallant, a managing partner at Contract
Security who acted as lead integrator on the various Totem installs,
“The managers at each location have the application loaded on their
PCs. Ed has it on his PC. With his authority level, he can see any
store. If there’s a problem, he can open up his laptop anywhere that
he’s got Internet access and log in.”

Tackling a retrofit
Browne says the new installs were “pretty
straightforward for us,” but for retrofits on some of the older stores,
Contract Security had to evaluate them on a case-by-case basis,
depending on how the previous installer had left them.

“Like anything, when you do a takeover, you find varying
installation levels: sometimes it’s done in modules, or all done at one
time or a retrofit. We found a lot of improprieties in cabling and the
way things were added.”

A particular problem, says Browne, is when cabling and door
controllers are located in warehouse areas, where they are subject to
more wear and tear, as pallets and forklifts are being moved around.

“So we had challenges trying to locate some of the wires and
repairing data bus lines that moved from module to module. Quite often
if we’re doing it, we try to bring all those modules into one location
like an electrical server room where everything is isolated and
everything is protected.”

Integrated security
Mah
says one of his biggest security challenges is dealing with theft,
particularly for some of the more portable and expensive items like
power tools, door locks and even some of the higher quality faucets
available in Totem stores.

“We see a combination of the amateur thief and then we see the
professional as well. I have also put in EAS systems and alarms on some
of our products to help with that,” he says.

“It’s not just one particular system” that makes the
difference, he says, but the whole security system working in concert.
Upgrades to access control, for example, have helped reduce the number
grab and dash-type of thefts.

“Before we put any of these systems in, we used to have a huge
challenge with grab and dashes where people would just grab the items,
then out the door and over the fence or into the yard. We allow
consumers to bring their vehicles into the yard, so of course, a lot of
things can go missing that way. The access control system has got that
down to almost non-existent,” says Mah.

“What we’re trying to do is make it as difficult as possible so that the thieves go pick an easier retail target.”

CCTV is also a strong component in Totem’s security network.
Some of the larger Totem locations have 100-plus cameras. “They’re very
heavily involved with video throughout the stores, from aisles to
checkouts to administrative areas, warehouse areas and yard shops,”
says Browne.

There are a variety of cameras in play at Totem depending on
location and requirements. Some stores have outlying buildings that
cannot easily be cabled, so Contract Security went to wireless
line-of-site solutions to cover the distance.

A preferred camera for Contract is a Honeywell HCS544, “which
has resolution close to a wide dynamic but at about half the
pricepoint. The image quality was almost parallel with what you would
find with a wide dynamic hi-res camera. We were able to hit a
pricepoint that worked for them so they could deploy more cameras in
the stores without exceeding budget.”

Browne likes to tell an anecdote about Totem’s camera set-up.
The Calgary Police and local RCMP hold loss prevention and counterfeit
detection sessions for nearby retailers.

“Quite often, they’ll be sitting the heads of Home Depot,
Canadian Tire, Hudson’s Bay, etc., etc. One of the officers that was
leading (a session) said, ”˜Here’s typically what we see on printed
imaged when it’s handed over to the police for prosecution.’ He was
showing print-outs and videos that just didn’t have the resolution
required for prosecution. We’re not seeing the quality we want to see.’

“Ed kind of chuckled and he had some of the printouts from
some of his stores in his briefcase. He held them up and said, ”˜How
would you rate these?’ They said, ”˜Wow. This is some of the best video
imaging we’ve seen printed off yet. Who’s system in this?’