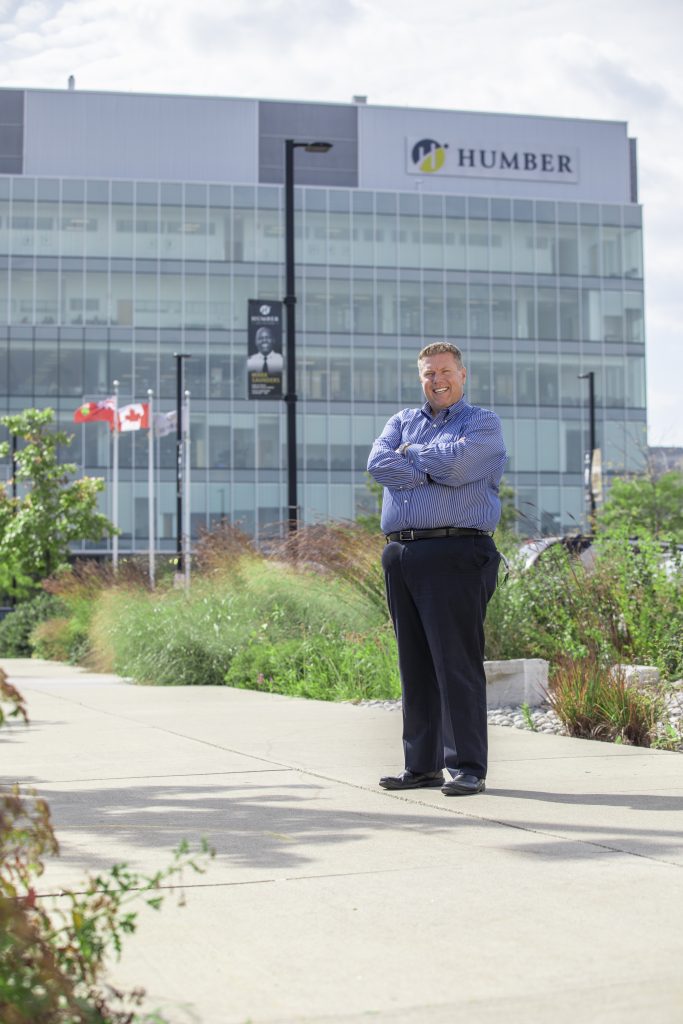 It’s often said that the best leaders lead by example. They’re not afraid to get in the trenches. They would never ask a staff member to do anything they wouldn’t do themselves.

Robert Kilfoyle, director of public safety and emergency management for Toronto’s Humber College lives all these traits. He recently asked his Humber security management staff to participate in a process that would assess their accumulated skills, knowledge, education and accomplishments, thereby giving them a career benchmark and a springboard to achieve further success. For his dedication to his staff, mentorship and leadership, Kilfoyle has been awarded Security Director of the Year 2019 by Canadian Security magazine’s editorial advisory board.

Kilfoyle challenged his team to seek a Certified Municipal Manager (CMM) accreditation made available through the Ontario Municipal Management Institute (OMMI). OMMI partners with a series of Ontario-based associations, including police, fire and emergency management, to offer specialized versions of the CMM within their given field. For security professionals working in post-secondary insitutions, they offer a CMM in coordination with the Ontario Association of College and University Security Administrators (OACUSA): Security Specialist (CCMI), Security Professional (CMMII) and Security Executive (CMMIII).

Kilfoyle made achieving a level of the CMM part of his staff’s performance review last year. Eight out of a possible 10 attained the certification last year, including Kilfoyle himself with the CMMIII. Of the other two, one was already preparing for a certification through ASIS International and the other occupies a business management role.

“We’re always looking at opportunities for development. I thought what a lot of them lacked was credentials. They’ve done a lot of training and a lot of work, but none of them have gone for any credentialing. I challenged them all, when it came time for them to do their performance reviews, to do this,” says Kilfoyle.

“That year, I said, OK: Everyone… I don’t care what level you achieve, you get the highest level you’re qualified to get, but everyone needs to do it.”

Like many who achieve success in security management, Kilfoyle’s original career path was policing. But he realized when he graduated from Sheridan College in 1988 with a degree in law and security adminstration, that his passion lay elsewhere.

His first full-time role in security was as a retail investigator for Sears at a Mississauga, Ont. store. He also worked for a number of security service providers early in his career but when one of those firms was acquired in the mid-90s, he found himself out of a job and looking for work at a time when he really needed it.

Kilfoyle’s wife had recently had a baby, so when a job opportunity came up in B.C., he moved his young family out to the west coast. In 1996, he started working as security coordinator for Vancouver General Hospital and two years later took on employment at the University of Fraser Valley (UFV) as associate director of security and emergency planning. He stayed at UFV for 11 years before he was offered a senior security role at Toronto’s York University and moved back to Ontario. Kilfoyle joined Humber six years ago in his present role as director of public safety and emergency management.

Since joining Humber, Kilfoyle has led a number of initiatives, including the establishment of an emergency operations centre. Humber comprises more than 30 buildings on its north Toronto campus, including three student residence buildings. He recently collaborated with the college’s IT team to create a one-button lockdown system, which could save precious time in the event of a crisis situation.

Like any major campus, Humber operates a series of security technologies and protocols, including access control, fire systems, public address and mass communications. But the issue for Humber and Kilfoyle was that they operated as disparate systems. Kilfoyle challenged the IT team to improve that situation.

“I want us to hit one button,” he says. “They laugh at me when I say that, but essentially I want to have all the systems integrated into one, so if we do experience an active shooter scenario on campus, or some other kind of emergency that requires us to respond quickly, all our security operations have to do is basically activate one button.”

That work is ongoing, he says, but progress is being made. “It’s not quite complete yet but we’re getting there.”

Another major initiative recently championed by Kilfoyle was raising wages for contract security staff. By making a business case to campus leadership, Kilfoyle was able to increase his department’s budget by almost a million dollars — approximately half of that was allocated towards guard wages. The difference on the frontline is noticeable, he says. “Our staff are happier, we’ve got less turnover and things are moving in the right direction.”

Throughout his career, Kilfoyle has participated in a number of security associations and organizations, including the Canadian Society for Industrial Security (CSIS) and the local ASIS International chapter in Vancouver, where he took on a number of roles including chair and assistant regional vice-president. He also earned his CPP designation in 2000. “I got a lot of mentors and a lot of friends through ASIS. It’s a great organization,” he says. When he moved back to Ontario, he became involved with OACUSA and for the last four years has served as the association’s secretary.

It was through his involvement with OACUSA that he learned more about OMMI and the certified municipal manager designation.

“I’ve always been a huge advocate for ongoing professionalization and education. It doesn’t matter what level you’re at in an organization, there’s always more to learn,” says Kilfoyle.

“That was something that was really impressed upon me early on in my career by folks that were mentors to me. They really pushed me to get certified. If you’re going to make a career out of it, you need to become credentialed. That’s something that I’ve taken with me.”

CMM doesn’t require that an applicant sit exams or take additional courses; it’s a measure of accumulated experience. Kilfoyle says he felt this was an ideal circumstance for his staff — an opportunity to gauge their success to date and strive for more.

Kilfoyle led the initiative, providing support and direction — even covering the cost of the application and framing of the certificates upon completion.

Bill McKim, OMMI’s executive director, explains, “It captures all their seminars, workshops, college courses, university courses, private sector courses, in-house courses and conferences. Anything they’ve done gets a point value based on its length of time academically. What it does is provide an assessment to give them basically a gap analysis of their career. But it can also provide specific guides on how they progress through the CMM.”

Kathy Branton, Humber’s manager of emergency management and business continuity, adds, “Rob had encouraged all of the members of the management team to start working on their packages, which includes going over your work history, your education and basically compiling all of that information together into a cohesive package, and then it gets submitted to OACUSA for review. The accreditation committee there reviews it, and if it meets all the criteria, it goes on to OMMI for their approval. Once that happens you receive this professional designation.”

Branton was one of the eight team members to receive her CMM designation. She also co-authored Kilfoyle’s Security Director of the Year nomination, highlighting his determination to see the project through and his unwavering support for his staff.

The CMM application process was enlightening, says Branton. “It allows you to go through and see what you’ve done in the past and look at your career and go, Oh wow, I’ve really done a lot.”

This was a common reaction, says Kilfoyle. No matter which level of CMM each team member achieved, it gave them a moment of reflection and a sense of accomplishment. “I would say it’s enhanced their confidence across the board,” he says. “They all have their certificates proudly hanging up in their offices.”

The joint accomplishment was recognized by the college, who held an awards presentation for all eight recipients. “That’s the great thing about Humber. We are a learning institution so we value the concept of ongoing learning, particularly adult learning — it’s important,” says Kilfoyle.

Certification also gives the staff something to strive for. The CMM will remain part of the performance review process in future years and team members are encouraged to seek their next level of accreditation.

The application process helped to bond the entire team and gave them a common goal. This approach is typical of Kilfoyle’s view of security and the importance of team-building.

“I’m fiercely loyal to my employees and to my team. I do that for a number of reasons. We often get called upon to do the difficult work — when the chips hit the floor, we’ve got to pull it together,” he says. “In order to expect those people to pick it up and do what’s necessary, they’ve got to know they’re supported and that I will go to the wall for them.”